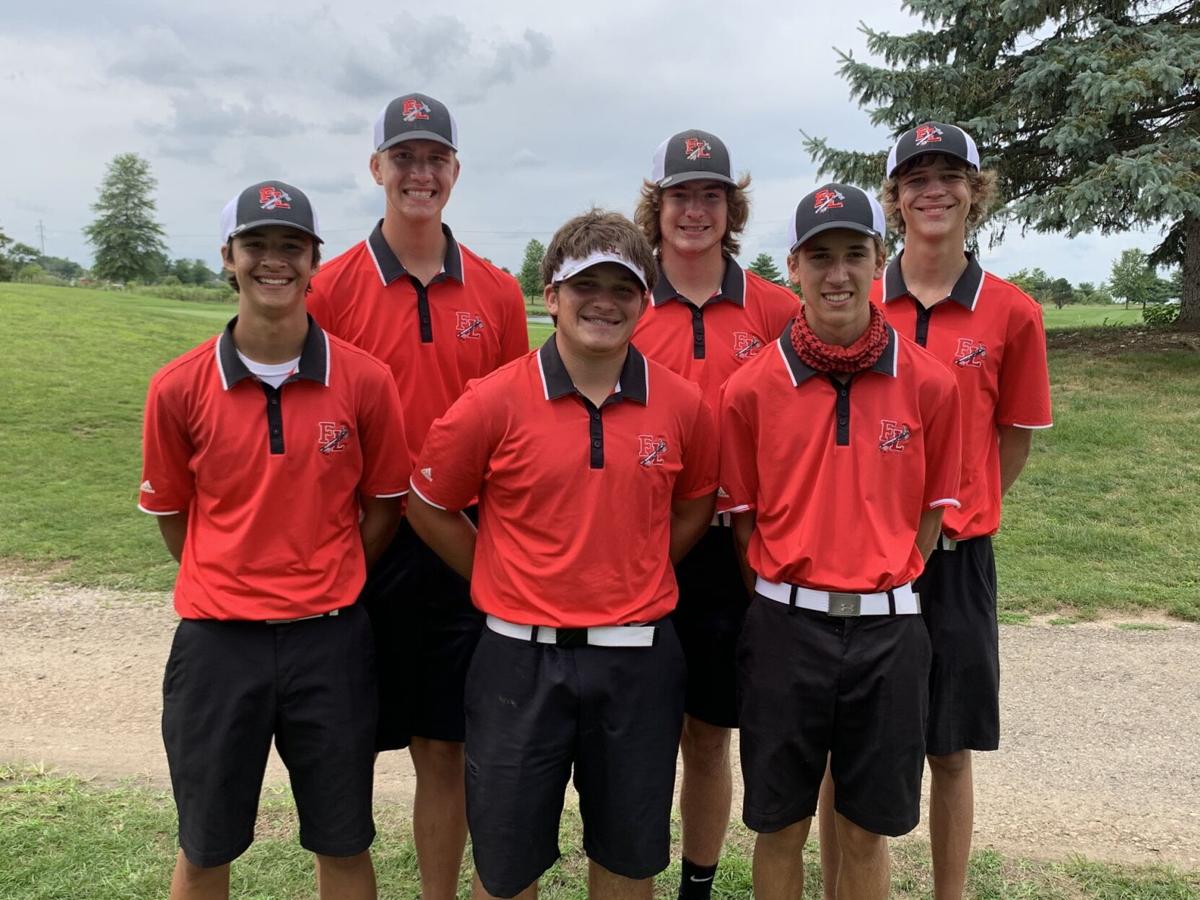 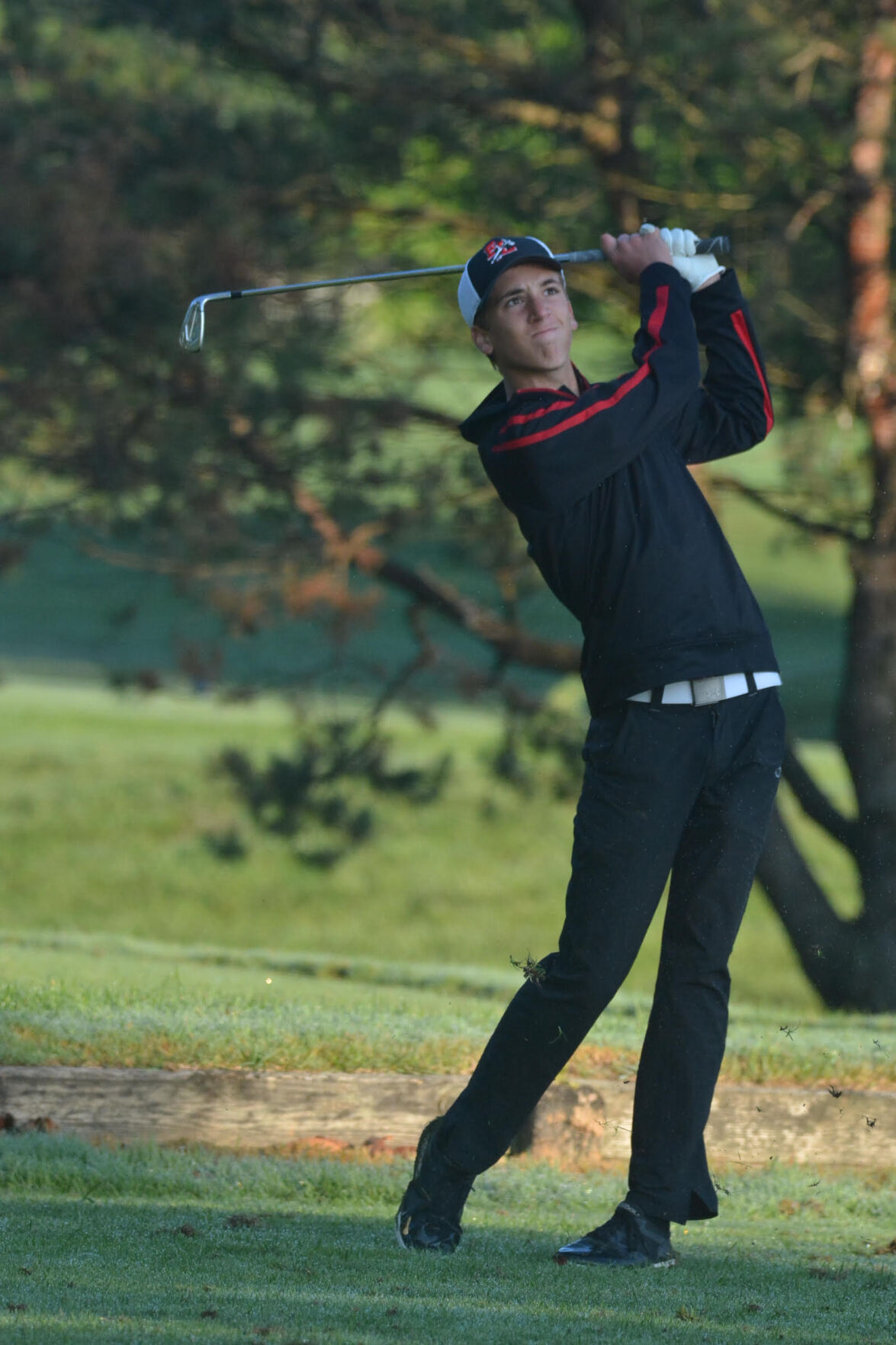 This story appears in the Sept. 8 edition of The Community Post.

Fort Loramie boys golf coach Brad Turner first noticed current sophomore golfer Adam Ballas many years ago, but it was as a spectator not a golfer.

“The first time I realized Adam might be interested in high school golf, he came out as a fifth or sixth grader to watch Brad Goettemoeller,” said Turner. “The first guy to make it state for Loramie since John Campbell back in 1982 or 83. That never happened. Kids show up at football and basketball games and start to follow the high school guys that are playing.”

After being named a co-MVP of the team last year with a 39 average, Ballas has continued to build on an impressive freshman campaign. This summer, he earned Player of the Year Honors as part of the Lima Junior Golf Association, while being the top point earner.

Right now, his average is around a 36, while setting the 18-hole record for Loramie this year (twice) with a few nine-hole matches under par as well.

“It’s crazy to think a kid that had a 39 average last year, can improve two and a half strokes from one year to the next AND he's only a sophomore,” said Turner. “That’s a testament to his work. Every member here knows who Adam is, they see him out here. He’ll play 18 in the morning, work, then play 18 in the evening.”

Ballas’ first memories of golf are playing with Tom Ballas, his grandpa.

“He got me into the game, chipping with him, I didn’t enjoy it at first but I started to realize after a few weeks of it, it was something I could be pretty good at because it didn’t take a lot of strength and natural ability, just something you had to practice,” said Ballas.

“Oh yeah, we hit balls,” said Tom, a golfer for the past 55 years. “I taught him the proper grip. How to take a divot. We played a lot of golf together. Over the years, we’ve kind of grown up together on the golf course.”

Tom took Ballas to the green to practice chipping and told him he couldn’t go home until he chipped one in, while he went up to the driving range to hit some balls. He wasn’t serious, of course, but Ballas has been on the course since a very young age honing his game.

“About ten minutes later this elderly gentleman came up to me and said, ‘is that your grandson down there?’ said Tom. “I said, ‘yeah what’s wrong?’ He said, ‘he’s out there bawling his eyes out.’ He thanks me to this day for making him practice chipping, I always told him that was the most important shot in golf. We all miss the green, so if you can chip and putt from two feet in front of the hole it takes pressure off of your putting and you can salvage a lot of pars that way.”

Ballas said that at first, learning the game was about doing everything the easier or general way, but it led to him being able to be competitive and close to the lead in competitions.

“I think that was what I always enjoyed about golf compared to other sports I've done like cross country or basketball,” said Ballas. “I was never close to the lead (in those sports) whereas this was something I was close to winning every time and I enjoyed that.”

Ballas told The Community Post his game has changed a lot since he was a kid but he still uses a lot of the things he learned from his grandpa. Particularly when it comes to pressure situations.

Ballas describes his grandpa as a course management coach, giving him good insight on how to play the game and analyze what he’s doing as well as mistakes he makes during a match.

“My swing isn’t perfect but I know where to miss and do the right things and in golf that’s sometimes more important,” said Ballas. “That’s what’s kept it fun for me.”

Ballas has been playing rounds ever since the second or third grade. He recalled a big improvement during a summer as a young kid and that scratched an itch to continue to get better.

Described as a student of the game by Arrowhead’s Golf Pro Kevin Chalk, his grandpa and Turner, Ballas utilizes YouTube as well as various golf sites and even social media to go back and look at how he can improve.

“I was never the most athletic kid, never the strongest or quickest,” said Ballas on why he loves golf. “Golf, you don’t need to be. Just work at it and when you do you can get in the winner’s circle and that adrenaline rush and pressure, that’s what I love about sports and golf gave that to me.”

Ballas started competing in the Lima Junior Golf Association league in sixth grade, changing his mindset from an activity with grandpa to waking up and looking forward to playing in a tournament.

This summer, he really wanted to win the league after losing by five or so points last year.

“I really wanted this year,” said Ballas. “I didn’t want it to be close. I wanted to show I was ahead of the rest and I think I did with the point totals.”

This year, he won his age group by 18 points and earned Player of the Year honors. He’s used the league as a tool to hopefully catapult himself into statewide and hopefully national competitions.

“That’s my hope,” said Ballas. “Going to those and improving my scores will allow me to enter those (bigger) tournaments. It’s always a goal. Lima brought that and showed me there’s always a next level. That’s what’s so fun. Now, it’s to the point where I love chasing what’s next.”

This summer, Ballas has started to work with Chalk, helping him with his consistency and swing.

“Adam's very intelligent, he absorbs it quick,” said Chalk. “He’s absorbed everything I’ve worked with him on. I gave him a different perspective from what grandpa taught him on some things.”

This summer, Ballas worked at the course too, allowing him to pick Chalk’s brain even more

“We can keep talking golf, why things go which way, ball flight laws, swing analysis, that doesn’t change, it’s been there since the beginning of the game,” said Chalk. “He needed to know more about why a ball was going left to right or right to left, how to hit the downhill shots, how to improve his short game, putting, we’ve hit all the aspects of where he needs to be.”

Chalk told The Community Post that the time Ballas puts in stands out, calculating that he probably hits 1000 balls a week.

Ballas enjoyed his first year of high school golf because of the focus he could put into it on himself.

“Cross country is a team thing and its great but golf lets you focus in on what you need to do,” said Ballas, who comes from a runners family and also runs on the schools cross country team. “Golf is you and your intricacies, it’s why I enjoyed first year of high school golf, tournaments and trying to make yourself better. The individuality of the sport made it really fun.”

The team entered more tournaments this year to help beef up their level of competition. With the strong start this year, Ballas and the team have high hopes with a good mix of seniors and sophomores after a top ten placing last year at states as a team.

“I really like this team and atmosphere around it,” said Ballas. “There’s a want to win in the team this year. Our seniors; Devin, Caeleb and Carson, I can feel the hunger from them. They’ve been to state the last two years and the want to be there again.”

“He eats (golf), talks it, sleeps it, watches Youtube videos he’s watching (on golf),” said Turner. “The thing that sets him apart is his absolute buy in to the sport.”

The boys team is off to a fantastic start this year, dropping just their first contest with the fifth score last week in an area ripe with golf talent.

Turner and other area coaches have been around to see the ebbs and flows of who’s near the top in the area and Turner is excited about the level of competition this year for Ballas and the Redskins.

“It’s awesome,” said Turner. “For the county to be as competitive as it is, it's the best show no one knows about. The fact we have five teams beating up on each other... Our sectional tournament, we’re going to have good teams not make it out this year. I hope we come ready to play, if we don’t, we’ll be done.”